Appalachia is filled with so much history, from how our area was settled by immigrants who weren’t supposed to settle in the mountains, to our music, to our way with food. Even our early settlers and pioneers were characters whose histories are filled with just as much folklore as they are with genuine facts. Appalachians are known for their storytelling and I got my fill of it, both historic and of the tall-tale kind, on my latest trail stop: The Davy Crockett Tavern.

David Crockett (who never referred to himself as Davy) was a frontiersman, politician, Americana figure, and solider. He was born and raised in the Limestone/Green County/Hamblen County area of Tennessee. Although his childhood home is in Limestone, the tavern, run by his parents, is located in Morristown. Here, individuals could eat, sleep, drink, and rest their horses. Growing up, David helped steer cattle and hunt game for the tavern, and he really did shoot black bears and wear coonskin caps. Crockett was part of the Tennessee House of Representatives and later held a seat in the 21st United States Congress. He served two terms, then went off to fight in the Texas Revolution, where he died defending the Alamo. What makes him such a folklore legend in Appalachia are tales of his larger-than-life personality, his charisma and his appearance. Crockett was known for his pointed nose, rosy cheeks,large forehead, and small chin. He also told some stories himself. While many people get him confused with Daniel Boone, Crockett and Boone never knew each other. Boone was alive 50 years before Crockett.

I learned this and so much more from my tour guide, Sally. I could tell that Sally loved telling the story of Crockett and life in the pioneer days. As she walked me around the premises of the historical site, she told me tales of the fire that made the Crocketts relocate, how David’s grandparents are buried in Rogersville, and about the grist mill his dad had. Sally also took me through a looming room and taught me about looming, spindles, the different kinds of thread they used (like flax! it isn’t just for eating!), and how they used a certain type of bug, called cochineal, to dye things bright red. I even learned where the childhood song, “Pop goes the weasel” comes from (and it isn’t about a real weasel chasing a mulberry bush). I saw old cast iron skillets, pots, irons, and curling irons. Sally showed me old coins and old paper money. There was even a ledger from the store that David’s mom, Rebecca, bought from. Believe it or not one could get a lot of stuff from that store. She was filled with so much knowledge that I could have stayed all day and listened to her. She was that good. While I was finishing up my trip more visitors came in for a tour. Sally’s face just lit up; she was so eager to show them around the tavern.

The Association for the Preservation of Tennessee Antiquities is the group that helped to restore, rebuild and acquire items for the Tavern.The APTA acquired the land in 1957 and the museum was built between 1957 and 1958. The furnishings have been donated by local families via the APTA. Outreach is very important to them, so they hold educational field trips and do work with Eagle Scouts. Their quilt square is a 4×4 piece painted by a local Morristown artist, Robert Spirko. The quilt square came to them from Nana Bear Quilts, which was a popular quilt store/quilting place in Morristown. When they closed, Nana Bear Quilts gave the bear paw square to Davy Crockett Tavern. It is significant because Davy Crockett was very proficient in his hunting skills, and it is one of the things he is known for.

In addition to all of this, they hold Live History Days and celebrate Davy’s birthday! The Live History Days are where people can come and learn about pioneer life and do things like our ancestors did. On Davy’s birthday they celebrate all things Davy and even have knife throwing competitions! Check the website for more information: http://crocketttavernmuseum.org/news.html

This is a great place for families and those interested in history. For $5 you get a guided tour and your money goes to help keep up the Tavern, which is taken care of by volunteers. 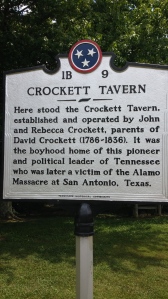 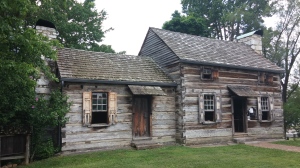 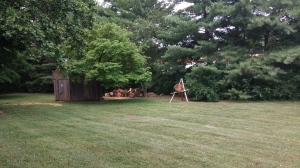 back of the tavern, the original tavern was where the trees are 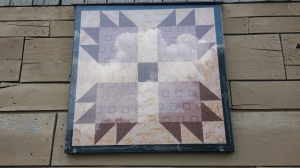 Up close view. It is covered by a protective glass to keep it from getting weathered. 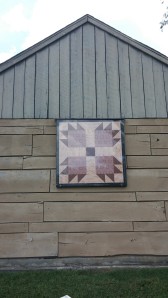 Bear Paw quilt pattern. It was painted by a local. 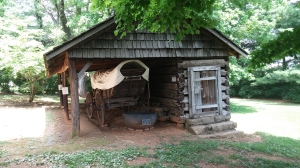 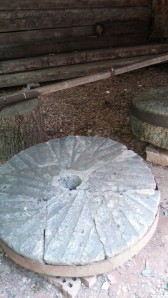 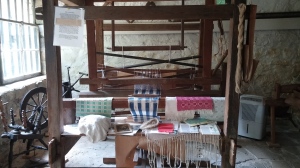 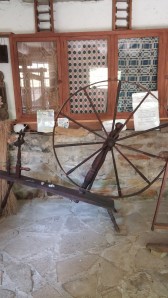 A spindle with some linen cloths in the background 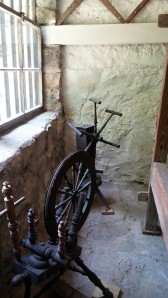 spinner’s weasel/clock wheel: where “Pop! Goes the weasel” comes from 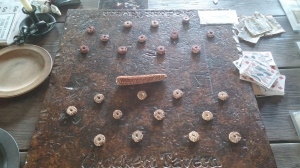 Up for a game of checkers? They would use the end of the corn cob, and color them with a market to differentiate the sides. They were called draughts.